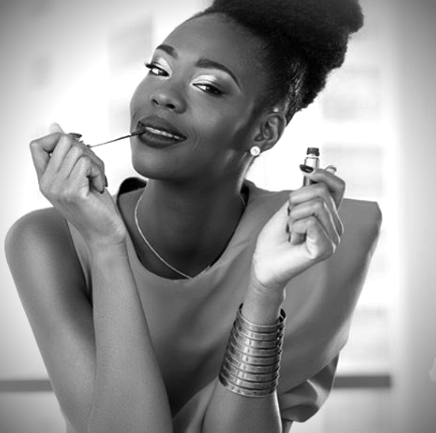 Joining us this week is CEO and Founder of Makeup For Melanin Girls (MFMG Cosmetics), Tomi Gbeleyi.

Growing up, Tomi looked up to Agbani Darego, the first native African who had won the title of the Miss World pageant. This had led her to eventually pursue modeling.

In her first runway show, she found herself in a situation where the makeup artists had difficulty figuring out how to work her makeup because they did not expect to be working with a model of her ethnicity that day. Tomi was the only black woman set for the runway at that time and the makeup artists were not informed. This became a very embarrassing situation for her since it caused some much unwanted attention, and she was just there to do her job. This experience was the “first direct impact to my self esteem,” as Tomi would put it. It had made her realize how makeup is such a vehicle for self-love, appreciation, and confidence.

Her first step to address this issue was to learn how to do her own makeup. This way she could always be prepared and avoid embarrassing situations like from her first runway experience. She did her research online and through social media, looking for communities that exchange the information she needed for makeup. What she found out, specifically about dark-skinned women and makeup, was quite interesting. She had learned that most multi-ethnic women with darker skin like herself would just “hack” the existing catalogue of commercial makeup by mixing products to achieve the color and look that would match their skin tone. This led her to create her own blog about makeup, and eventually her own community on social media.

Tomi started Makeup For Melanin Girls and was one of the first brands in Instagram that catered specifically dedicated to dark-skinned women.

“I think just being able to go from zero to one is beautiful. It’s something that should be celebrated.” – Tomi Gbeleyi

Her blog and Instagram following grew very quickly, and Tomi also created campaigns for women empowerment in the beauty scene. Her efforts really paid off when a New York Times journalist took interest on one of her campaigns and reached out to her to feature her. This led to further growth and exposure, and her continued success eventually led to the beginning of the MFMG beauty brand.

MFMG is now an established independent brand that sells globally online. Tomi’s products are even used and supported by people in the entertainment industry like Gabrielle Union, Bozoma Saint John, India Arie, and Cynthia Erivo.

Tomi talks about how she grew her brand, and how she came up with the creation of her products, and how her products had made a difference and changed peoples lives. She also talks about the journey of going deciding to go full time on her business, some business tips from her experience of starting up, the challenges of entrepreneurship, the different roles and hats she has to wear, and the hard work of running a beauty brand.

“I’m making more women around the world feel confident that they can do things, more women that can say ‘I can’… more women feeling beautiful and confident to take on whatever challenges come in their way.” – Tomi Gbeleyi